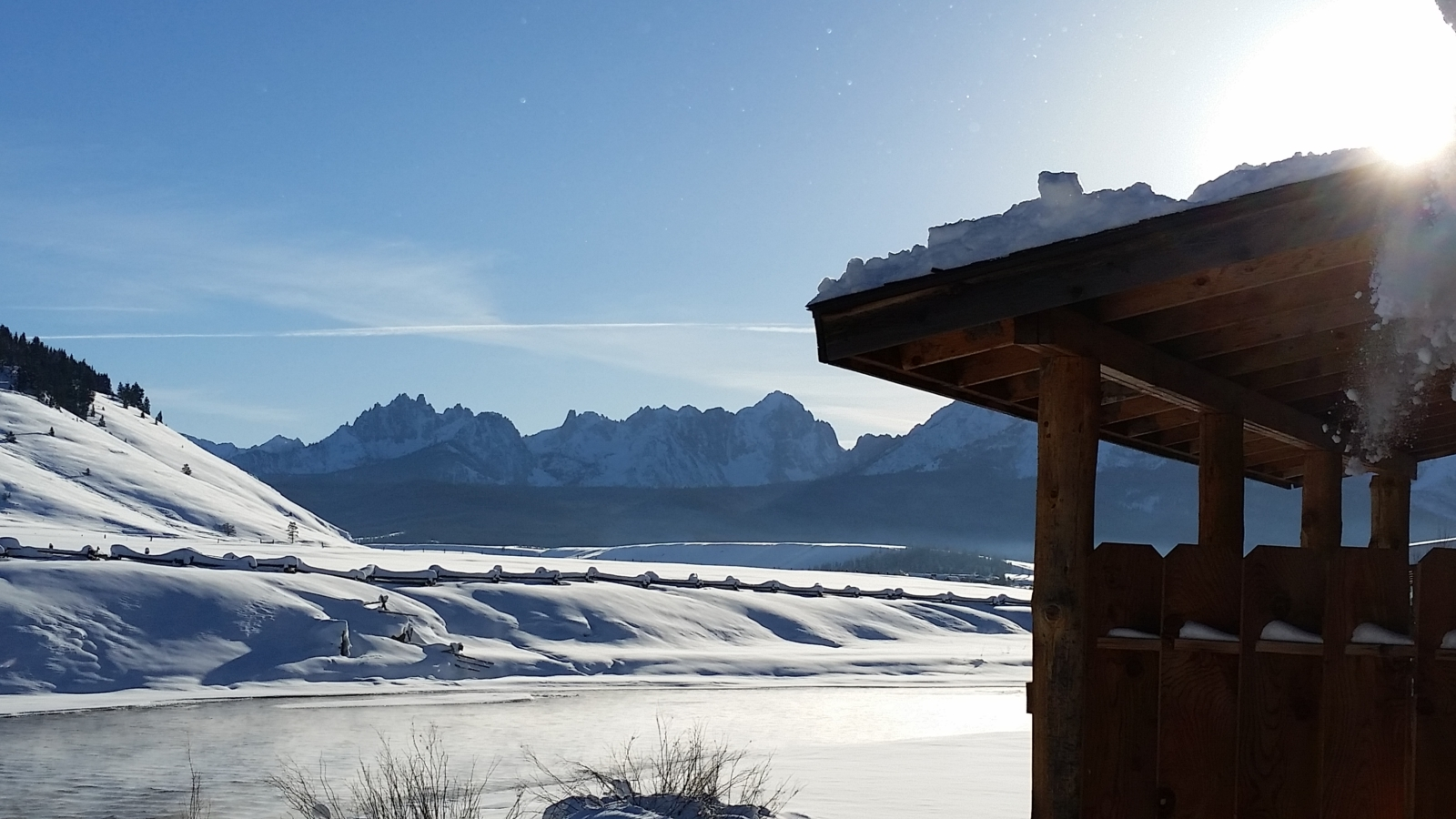 A lot of folks here in Stanley have been seeing things from an unusual perspective this week. When word started circulating of the first collapsed building in town, we all got antsy about snowloads. I’ve been enjoying the views from atop several houses, businesses, and trailers, removing 3 feet of the heavy wet white stuff.

Extra Chores And speaking of a different perspective, I neglected to introduce myself last week and let readers know there’s a new face here behind the words at the Stanley Chamber of Commerce blog. I’m looking forward to sharing this amazing place from another point of view. My family came to the area in the early 1870’s when John G. Morrison staked claims on the Yankee Fork, and sent word home to New Brunswick for his four Steen nephews to work the Jordan Creek placer. By 1900, brother James Steen owned the holdings before being laid to rest in the Bonanza Cemetery. As the first rush played out, brother Daniel Morrison Steen made the journey over Loon Creek and into the Camas Creek drainage to make his stand at Yellow Jacket Mine.

There, the Steens sunk roots and we’re now into our seventh generation on the property. I spent my summers at Yellow Jacket and eventually wandered deeper into the Frank Church Wilderness, drug by my mother on countless backpacking trips to the Middle Fork. Initially, watching the rafts go by held no allure, but at 13, when a friend took us on a private rafting trip, I was immediately hooked. I spent the following winter earning money to buy a backpack, campstove, sleeping bag and tent, and made plans to spend the next summer living in a cave on the river, eating bark and berries. My mother protested but eventually caved, and I made my way down to the river where I was lucky to be adopted by the river outfitting community.

We passed through the Sawtooth Valley many times in the 70’s (family pictures posed at the old Galena Overlook), but it didn’t really become part of my trapline until I started working on the Middle Fork. After 13 seasons working on the river, I bought an outfitting business on the Salmon in 2001. Stanley became our waystation on the long shuttle drive between Riggins and Salmon…a place to fuel our vehicles and bodies and maybe waylay for a night on the town. Over the years, I liked to think of myself as something of a local: I snuck into the Snakepit with the natives, did the Stanley Stomp with Suzy Markley in the honky tonk where Riverwear is now, celebrated the end of summer at Bob Danner’s hangar, and played music at Middle Fork Rapid Transit warehouse jams. I made it to the 2002 Grand Opening of Bridge Street, watched 4th of July fireworks on the back lawn of the Mountain Village, danced the night away at early Braun Brothers’ Reunions, and sported the obligatory Rod and Gun Club bumper stickers on my vehicles. No one was as surprised as me when Stanley recently became my home. Joining forces with a lifelong friend, I’m now part of the Bridge Street Grill/Woolley Ranch family. Along with Yellow Jacket Mine and outfitting responsibilities, I help Brett with a very busy restaurant, wedding and event catering, ATV rentals, overnight lodging, and ranch chores. I’m not the only one to carry on a love affair with the place, and the relationship as a resident is much more complex than as a visitor. Like anything you come to know more intimately, the shine may fade a little, but the attachment deepens. The Sawtooth Valley holds a special place in a lot of hearts, but I’m not sure you love a place until you love it at -38 degrees.

That’s the story looking back. But as I said, this week the perspective is all about looking outward, upward, and forward—from the eaves at home, at Bridge Street, at White Cloud, at the Kasino Club. Looking out across town to see friends and neighbors, wielding shovels, protecting homes and businesses, high spirited, under watchful mountain eyes. From up here, the view ahead looks pretty good. Cheers, and here’s to a bountiful New Year under the shadow of the Sawtooths.