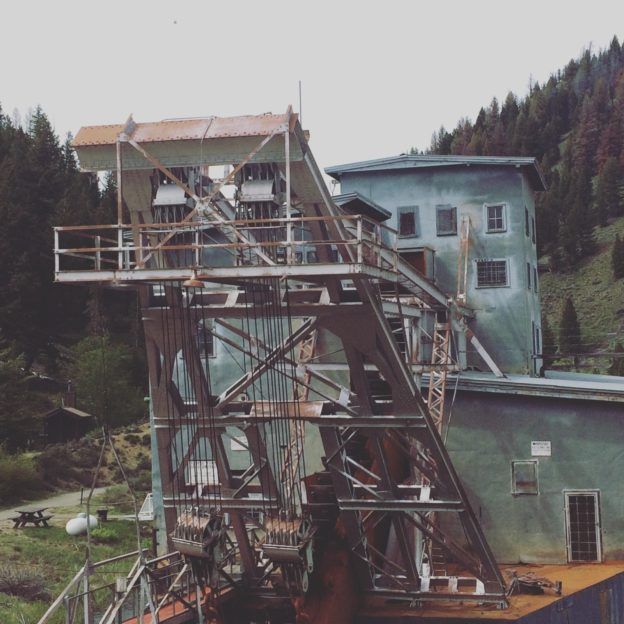 A Look Into the History Of the Yankee Fork Dredge

The history of Stanley, Idaho is one of patience, bravery, cold winters, and most of all, gold. Gold encouraged people to make their first trips out to the unknown west where they began the long and brutal search. One place in particular is the Yankee Fork Gold Dredge, about 20 miles north of Stanley past the Sunbeam Village.

This dredge is a stunning 988 tons, with a total of 71 buckets on the ladder, each weighing approximately one (1) ton each. But the shear weight of this machine is not what we are here to talk about. We are here to talk about how this mass of steel that brought over 1 million dollars in gold out of our land.

This dredge began its operation in August of 1940. It ran every single day, 24/7, to maximize the amount of gold and silver it would uncover. It did not stop until October of 1942 in order to focus more efforts and money for World War II. The dredge started up again in 1946, closed one year later, and then was sold to J.R. Simplot and his business partner Fred Baumhoff.

It was during this time that J.R. Simplot completed the 5 1/2 mile claim up the Yankee Fork. After leasing a plot adjacent to his own, and completing that section as well, they walked away from the dredge. However, the dredge was on the Morrison’s property, and they wanted to charge Simplot for rent if he was to keep the dredge where it was. Simplot hired a whole new crew in order to turn the dredge around and move it to where it sits today.

This mass of metal was run off electricity, and for many of the men that worked here, they soon had hearing issues. The noise was so loud that they could not even speak to each other. Instead they would use a bell system to communicate with the other employees. Those that were off duty at the mining camp down river would know if something was wrong at the dredge because it would get very quiet.

Although the landscape is forever changed, although there was not as much found as they originally planned, this is a part of our history. There are small mining areas all across the Sawtooth Valley, and most have a small ghost town like Custer where some of the miners would go at the end of the day.

Where the dredge sits now is its final resting place. The land has been donated over to the U.S. Forest Service in 1966. It is now run by a group of volunteers from the Yankee Fork Gold Dredge Association in 1980, and they give wonderful and extremely informative tours. There is a lot of history to unfold up the Yankee Fork. There are a lot of stories to be heard as well, so be sure to pay them a visit!