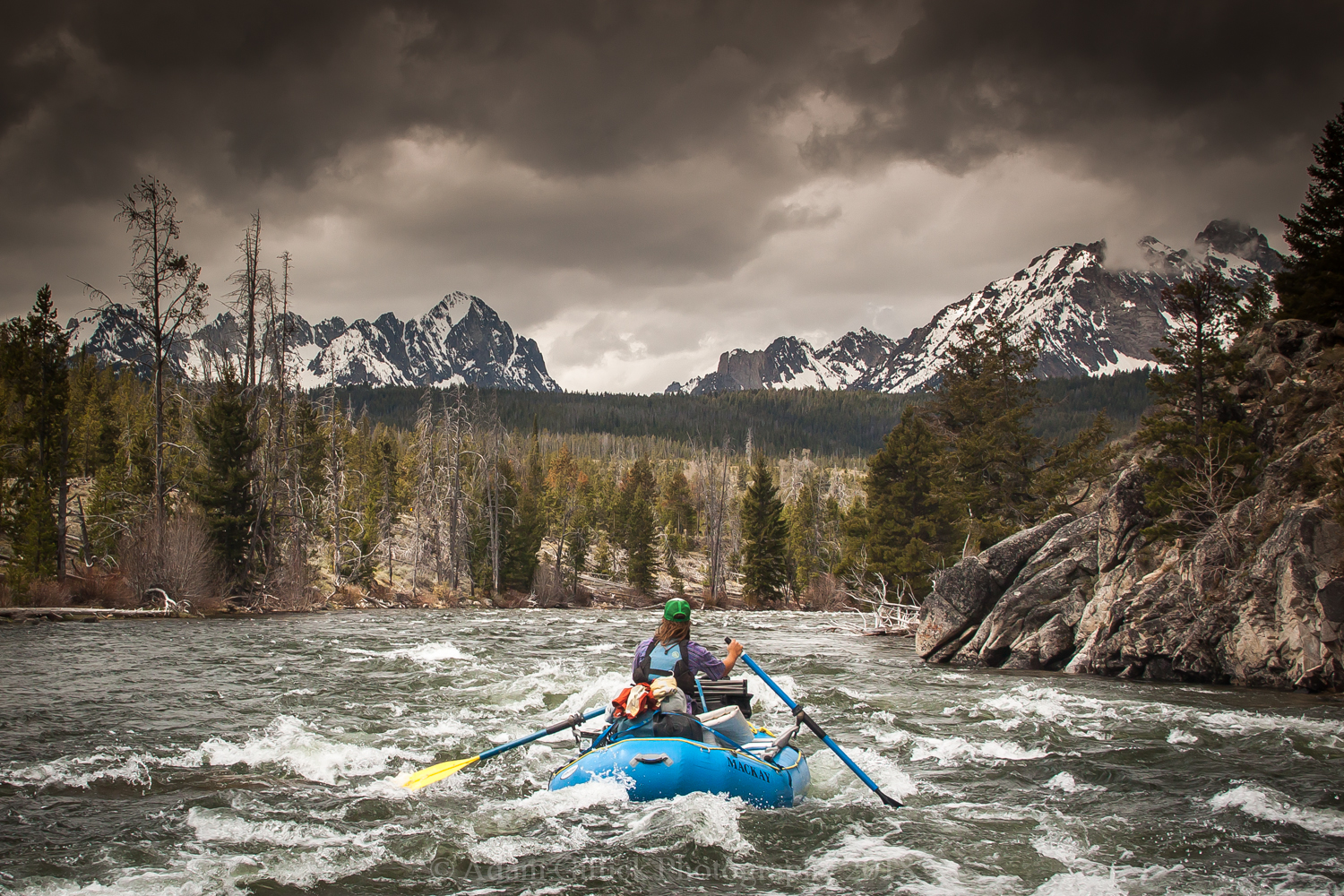 A River is Born: Headwaters of the Salmon River

A river is born in this valley. From the towering peaks of the Sawtooth and White Cloud mountains, snowmelt and spring-fed streams form the wild and scenic river, known as The Salmon. From the foot of these jagged granite behemoths, the salmon carves its way 425-miles through the central Idaho batholith. Every mile, untamed, is striking in beauty and wonderment, but this is a story of river's beating heart.

It's May 15, and the river is rising. The time has arrived for our annual spring raft trip on the uppermost, floatable portion of the river. Come summer, the flows will be too low to run. The river will be better left to the spawning Chinook. The window to float this section is short and that time is now.

We launched that fateful morning, with all our anxieties packed for the journey. The forecast is calling for thunderstorms, but we came prepared. Our optimism dwindles slightly, as the clear morning skies give way to a storm front rolling in from the south. The smell of rain begins to fill the air. We set sail as the sun is swallowed up by the ominous clouds. Stanley is our final destination.

The winter of 2016/2017 brought deep snow and, consequentially, extremely high water the following spring. The impressive force of the river had transformed itself. As we turned each bend, an unfamiliar scene unfolded. Gravel bars were deposited like mine tailings, directing the river into unchartered channels. Upturned root balls, ripped from the earth, lined the shore. Debris lay in jumbled piles along the washed-out banks. Beyond the river, the rolling hills of the Sawtooth Basin are carpeted in shades of green, dotted with wildflowers. The serrated peaks, still frozen, tower on the horizon. Songbirds chirp and flirt in the budding willows. Mergansers, herons, cranes, and geese shuffle across the water, taking flight around each turn. River otters fish and play, watching curiously as the boats go by. With each new creek, spring and trickle, the river increases in volume, speed, and power. Hellroaring Creek, Champion Creek, 4th of July Creek, the river meanders through the open meadows and dense thickets of Decker flats. 360 degrees of Spring in Idaho.

The clouds, gracious to this point, hang heavy as the patter of rain is cast across the water. We push on towards the Hatchery where a series of obstacles await. The first is a plunge off the diversion dam. Going in, the lead boat disappears momentarily, seeming to be swallowed up and spit out by the river. Shortly downstream, a fish trap is strung across the river. It is critical to make sure nothing on the boat is above the height of the cable. The final obstacle is the fish weir, closed during spawning and potentially hazardous to pass when open. It is advised that boats portage on river left.

Just beyond the hatchery, we pass under Buckhorn Bridge. From here, the river steepens and what has been a casual float for most of the trip, turns into a rodeo. Around the next corner, a peculiar sight reveals itself. What appears to be the river flowing uphill is the mouth of Redfish Lake Creek. This churning avalanche of whitewater is the gateway of the threatened Sockeye Salmon spawning beds.

With most of our journey behind us, we pull into Sunny Gulch for the night. Fire-grilled elk fajitas are on the dinner menu and we are hungry. After dinner, we hiked up the trail behind camp, our eyes scanning the ground for souvenirs. To the top of the ridge we climbed, which might as well be the top of the world, both in scale and view. The evening sky grew dark, so we descended to our hammocks where the rushing water calmed our minds to sleep.

The following morning blessed us with good weather for our final leg of the journey. A big kettle of camp coffee; griddle full of potatoes, bacon, and eggs; gear packed and loaded, and this wayward crew set off. The final stretch is a rowdy wave train. Mt. Heyburn, Thompson, and Williams peaks guard the passage. With our hearts longing for the river carry us further, our journey must come to an end. We've arrived home in Stanley.