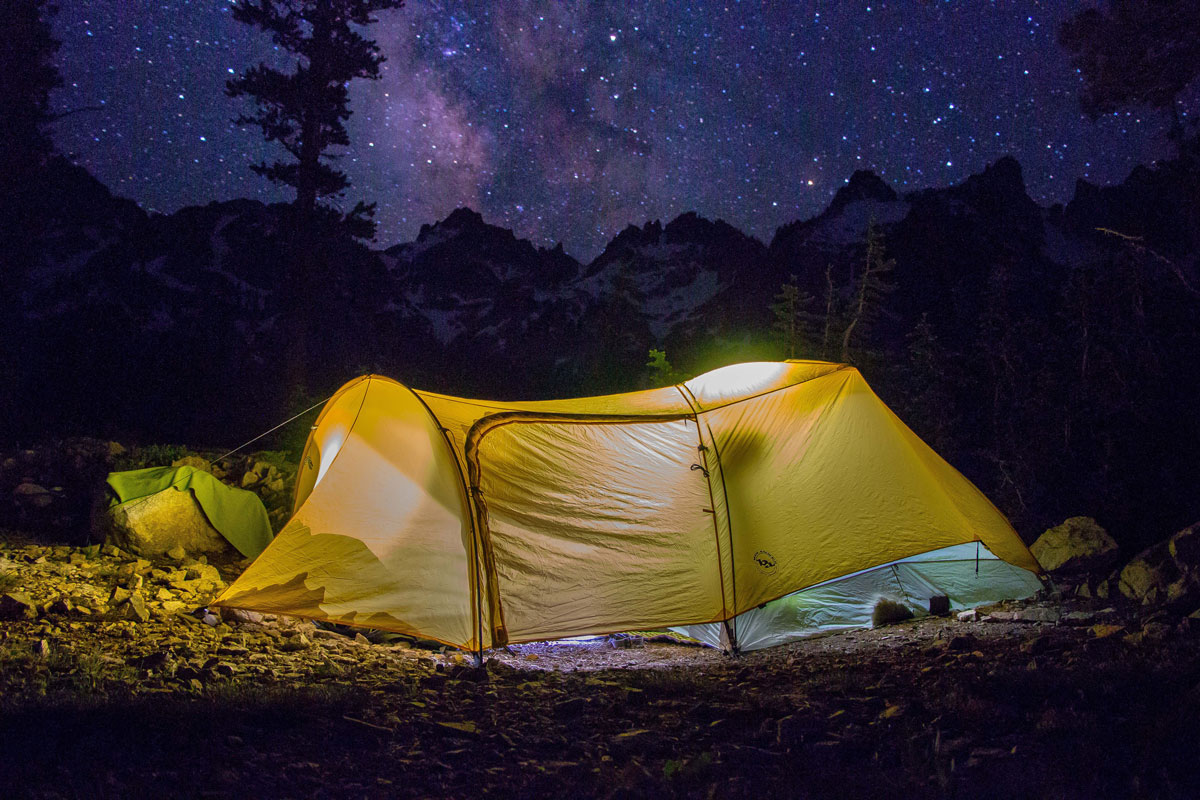 A Stargazer’s Guide to the Central Idaho Dark Sky Reserve

The most noticeable thing about driving through central Idaho at night is what you don’t see: there are no artificial lights. You’d expect that on high mountain passes, but when you leave remote spots like Banner Creek or Galena Summit and approach the town of Stanley, you’ll notice a conspicuous lack of street lights.

The vast majority of the United States doesn’t get the full night sky experience due to the proliferation of artificial lighting. This is the case in cities and suburbs, but it’s also true of less densely populated areas that are still fairly close to a town. Stanley, on the other hand, is 130 miles from Boise, the nearest good-sized city, and nearly 80 miles of mountain ranges block the lights from Boise.

With its brilliant night skies, Stanley is part of the Central Idaho Dark Sky Reserve (CIDSR), a 1,400-square-mile swath of the Sawtooth Mountains stretching from an area a few miles northwest of Stanley to Sun Valley. The CIDSR is considered an International Dark Sky Reserve, and the first of its kind in the United States. Throughout the world, there are only about a dozen.

It takes a lot to become an International Dark Sky Reserve. Not only must the core area be free of excessive human-made light, thanks to regulations or a commitment to long-term planning to reduce light pollution, but the International Dark-Sky Association also requires that there be a significant buffer area, too. For an area to be considered, stargazers must be able to see the Milky Way with the naked eye. We’re fortunate that we have such a place in the U.S., and Stanley makes the perfect spot to experience the CIDSR.

There’s no bad time to visit Stanley; you can see the stars in all their glory year-round. That said, timing your trip around the New Moon might just be the best time to go. An abundance of crisp, clear nights increases your odds of seeing the stars. The Milky Way rises over the Sawtooth mountains and can be easily seen with the naked eye. It also helps that the night sky is visible anywhere within the preserve, whether you're camping near Redfish or walking back to your hotel room. All you have to do is look up!

The CIDSR maintains a list of significant celestial events on its website to help you plan your trip. No matter what time of year you’re visiting, check the lunar calendar. If it’s possible, time your visit to coincide with a new moon when the sky will be darkest, and the greatest number of stars will be visible.

How to See the Stars

While Stanley is a convenient place for stargazing, there are still a few things you can do to maximize your experience. For example, if you drive to a spot to see the stars, turn the car off when you arrive. Headlights and interior lights can affect your eyes and limit your ability to see the night sky. If you’re taking a walk to observe the night sky, bring a headlamp with a red light setting because it won’t disrupt your vision as much as a traditional white light. Also, keep in mind that it can take up to 15 minutes for a person’s eyes to completely adjust to the darkness.

What to Look For

During the winter months (in terms of astronomy, this means late December to late March), you’ll see constellations like Orion’s Belt, which contains two of the ten brightest stars in the sky. It serves as an excellent reference point to locate several other constellations. During this season you can also see Taurus, Canis Major and Minor, and Gemini, among many others.

Visit in mid-December to catch the Geminid meteor shower, which produces more than 100 meteors each hour during its peak. Or, go in January to see the Quadrantids meteor shower, when you might see up to 40 meteors an hour. At various points in the winter, Mercury, Venus, and Jupiter are also visible.

In the summer months, keep an eye out for Cygnus, Hercules, Sagittarius, and Scorpius. F you’re planning a summer trip, try to go in August when the Perseid meteor shower occurs.

Whenever you’re headed to Stanley to see the stars, check the local weather forecast and EarthSky.org to see what’s on the docket for your viewing pleasure that evening. There are also numerous apps you can download to your phone to help you pick out constellations—just be sure and do it well ahead of time, since looking at a screen will make your eyes take longer to adjust once you’re outside.

Things to Do When You’re Not Stargazing

Thanks to its proximity to the Sawtooth National Recreation Area , Stanley is a perfect base camp for year-round outdoor activities during the day. In the winter, you can cross-country ski or snowshoe out to Redfish Lake or explore Galena Summit. During the summer months, you’re minutes away from dozens of great hiking trails and some of the best fly fishing in the country.

Once you’ve worked up an appetite, grab a bite at Redd Square in Stanley. It’s one of a handful of spots in town that’s open during the winter (limited hours), and its high-quality ingredients, delicious menu items, and a carefully curated selection of draft beers make it a sure hit. Be sure to sign the propaganda journal while you’re there.

In the summer months, camping is a great way to go, since you can essentially stargaze all night. During the winter, this is a bit more complicated, as even hardy campers will likely get chilly in the consistently cold night temperatures.

You’ll find several camping areas near Redfish Lake , just ten minutes south of Stanley on Highway 75. Sites at four developed campgrounds can be reserved in advance via Recreation.gov, and six more camping areas have sites available on a first-come, first served basis. Redfish and Little Redfish lakes also have tons of recreational opportunities, including fishing, hiking, and boating during the camping season.

Fortunately, Stanley doesn’t shut down during the best stargazing season. The Stanley High Country Inn remains open year-round and even runs a winter special (two nights of lodging plus meals) with a deep discount. You can also find affordable lodging at the Mountain Village Resort .

Whether you visit in winter or summer or any other time of year, you’ll find that stargazing in Stanley is a unique and eye-opening experience. We’re surrounded by so much artificial light these days that we forget how dazzling the night sky can be. As you’re traveling through the Central Idaho Dark Sky Reserve, you’ll understand why ancient civilizations felt a sense of wonder and mystery when they looked to the heavens.

Written by Emma Walker for Matcha in partnership with Stanley Sawtooth CoC.