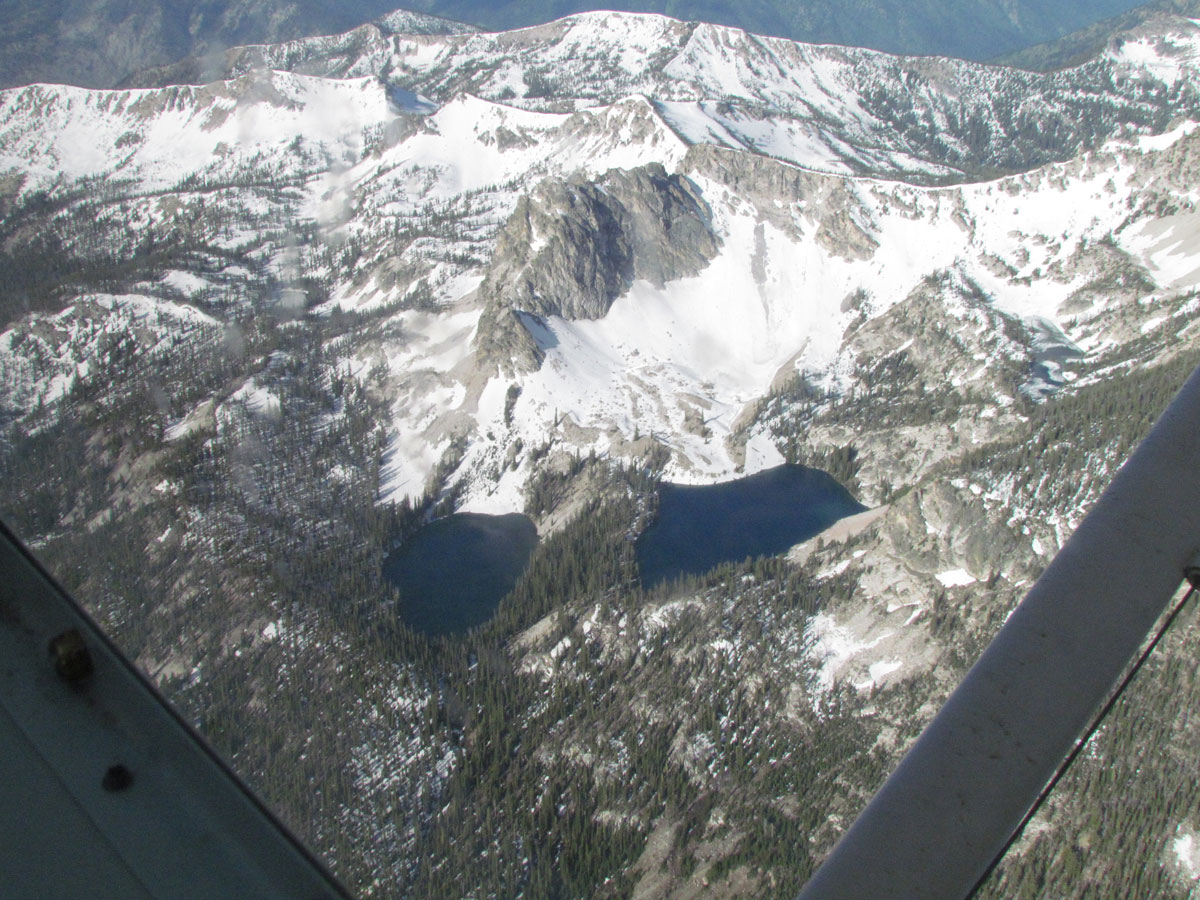 We woke up to an absolutely beautiful day in Stanley. There was a little fog this morning but it was quickly burning off. Finally, the Sawtooths aren’t covered with clouds and we could fly up in Jeff’s backcountry airplane to check out the alpine lakes. We took off to the south and then turn right to start our climb north west. When we decide we are high enough we turn towards the Sawtooths and head over Stanley Lake, which is completely melted out, but as you head further into the Sawtooths over Stanley Creek towards Bridal Veil Falls and Lady Face Falls. The Hanson Lakes above Bridal Veil are still mostly frozen over. Then we turn and go over Sawtooth Lake and Alpine Lake. Alpine Lake is still frozen over but thawing around the edges. Sawtooth Lake is still completely covered in snow and ice.

South East side of Sawtooth Lake

We circle around the south side of Sawtooth Lake and head towards Redfish Lake. Of course Redfish this time of year is beautiful and warm but as you can see above Redfish it’s still winter!

Our next lake to fly over is Imogene Lake with a view of Hell Roaring. Looks like Hell Roaring would be a good place this weekend but by looking at this view of Imogene I’m not exactly how far up the trail you would get if you wanted to go there.

Imogene Lake with Hell Roaring in the background

We turned and flew over Farley Lake which is thawed out with still a bit of snow in the surrounding area. Farley Lake looks great, not sure if you could get there easily enough. Then we flew past Toxaway Lake which is still quite frozen.

Since we flew over the back side of the Sawtooths we turned yet some more to get a look at Marshall Lake and the Bench Lakes. Marshall is thawed out, but bring skis and a sled to get in and out of there! The lower Bench Lakes are thawed out and I’m pretty sure that you wouldn’t have too much of an issue (maybe some snowfields) in getting in there. But the upper two Bench Lakes are still quite frozen.

After the Bench Lakes we decided to take a tour of the White Clouds and see what was going on in the Champion Lakes, 4th of July area. Here is a photo of a small alpine lake that is just north of the Champion Lakes. I had to share the ice melting off this lake since it has the most interesting patterns. Makes you wonder what the wildlife does in the winter on these alpine lakes!

The 4th of July, Champion Lakes and Washington Lake are still snow covered and frozen over. We also flew over Bourne Lakes and they are so covered in snow that I had a hard time seeing where the actual lakes were.

Believe it or not, there is still enough snow in the higher country to still have avalanches. So be careful out there!

Avalanche on north side of 4th of July Creek

We will update next week, weather permitting, for a new Alpine Lakes report.