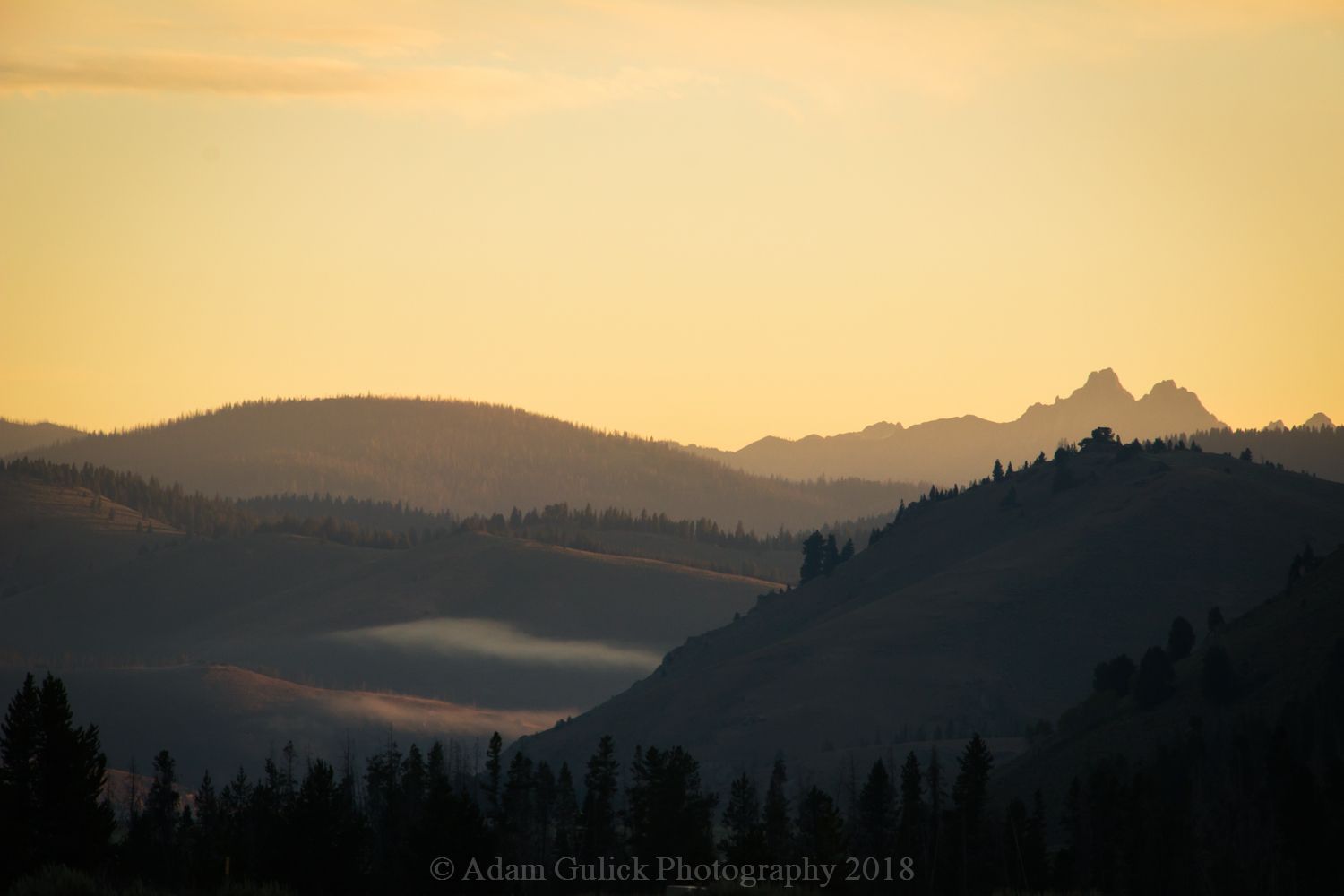 The Sawtooth Mountains draws visitors from across the globe to the Stanley area, but the beauty expands in all directions, beyond those iconic peaks. Shortly after having moved here, I was able to take my attention away from the magnificent Sawtooths. One particular landmark drew my attention. Anyone traveling to Stanley, Northbound on highway 75, have probably seen it towering in the distance, a rugged mountain that would be at home in the Sawtooths, but in its jagged composure sits alone in the northern skyline. With maps strewn across the floor and a little help from a local old-timer, I was able to attach a name to that mysterious mountain in the North country. Her name was Cabin Creek Peak. Since that day, that mountain has become a bit of an obsession.

Surrounding the base of Cabin Creek Peak, tucked in the surrounding basins, are numerous alpine lakes. From those lakes and high basins, creeks form, flowing in all directions, shedding either toward the Main Salmon or The Middle Fork of the Salmon River. There is no convenient way of reaching Cabin Creek Peak. The roads, though scenic, are long and rugged. The trails are long and the climbs are steep making the effort a commitment of at least 3 days. The reward is some of the most stunning landscapes Idaho has to offer. Having set long enough on the back burner, this Labor Day weekend a friend and I set out on a non-conventional, off-trail loop around Cabin Creek Peak. It was one for the books.

Reaching our starting point was an adventure in itself. The shortest distance to out route would require a 20-mile ATV ride on the dirt roads leaving Stanley, taking us over Basin Butte and deep into the Halstead burn of 2012. We parked to ATVs just past Hindman Lake at the foot of the mountain. Our journey began through the scorched forest and into a scree-filled valley off the west slope of the mountain. The unique character of the mountain began to reveal itself in the afternoon sun. The jagged spires of the peak protrude from the scree fields. The mountain abruptly shifts its color from stone grey to a warm earth tone of iron and ochre. Tucked away at the top of this valley, we arrived at an unnamed lake. It was an inviting lake, worthy of a night's stay, but our destination lies over the pass, across the southern boundary of The Frank Church: River of No Return Wilderness. From the top of the pass, we gazed into the headwaters of Knapp Creek. Knapp Creek is a tributary of Marsh Creek, which forms the headwaters of the Middle Fork. At the top of the Knapp Creek drainage sits more than a dozen medium to small lakes known simply as the Knapp Creek Lakes. We dropped to the uppermost lake, followed wolf tracks along the muddy shores to our first camp.

We spent the next morning exploring North into the headwaters of Loon Creek, where more mountain lakes rest below the 10,012 ft. Mt. Loening. The immensity of the expansive wilderness tempted us to explore deeper. Loon Creek is an impressive tributary of the Middle fork, but with our hearts already set, so we admired it from the top and saved the adventure for another day.

We returned to the lake, broke camp, saddled our packs and continued west over the North flanking ridge connecting Cabin Creek Peak and Mt. Loening. After a somewhat technical scramble, we reached the top of the pass looking down into the Cabin Creek drainage. From here we could see four small turquoise lakes in the red scree slopes of the mountain. Below these lakes, tucked in the timber, the deep blue water of Crimson Lake shimmered in the afternoon sun. Such an inviting sight, we made our descent. We spent night two at Crimson Lake watching the sun set and rise over Cabin Creek Peak deep in the Idaho wilderness. By morning the red rock mountain basked in the morning sun painting the lake...crimson.

Day three we moved deeper into the guts of the mountain. We set up camp at one of the small unnamed turquois pools below the grey towers on the east end of the mountain. The vegetation was sparse and even the smallest voice thundered in an amphitheater of stone. From here we climbed to the saddle dividing the gray towers and the summit of Cabin Creek Peak. The rugged Salmon River Mountains unfolded before us. Smoke from the Bible Back fire and the White Cloud Peaks sat on the horizon.

The last day of our journey turned out to be our longest. We set out cross country, not sure what obstacles lay ahead. Our first peak around the east side of the Cabin Creek peak revealed something of a bleeding volcano, the west face of Red Mountain.

We continued to cling to the side of Cabin Creek Peak aiming for the saddle off the west ridge of Red Mountain. Once over the saddle, we were back in the scared landscape of the burn. Windfall and charcoal stained pant cuffs lay ahead of us. Coming around the bend, a dramatic new face of the mountain revealed itself. We dropped to a lush meadow at its feet that seemed of another world from where we were earlier that morning. The North face of the mountain leaked like a sieve providing for the grass and mountain herbs for the wildlife that feeds on them. At the other end of the meadow, our final challenge awaits. A short but steep ascent and descent over an appendage of the mountain and back to the road. We followed Red Mountain road, through the fireweed of the headwaters of Basin Creek. Our ATVs came into view. Our journey came to an end. The mountain had been conquered!

~ Photography and Blog by Adam Gulick