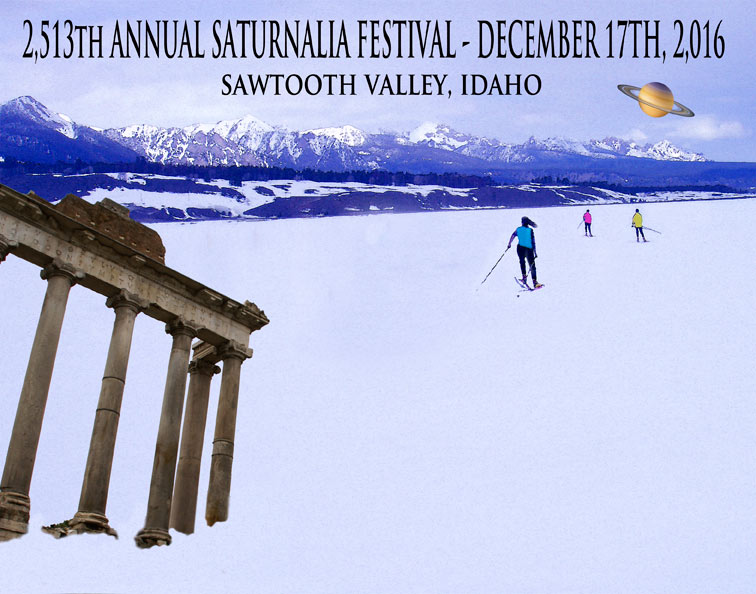 On Friday, December 16th, the following Sawtooth ski trails were rolled through deep new snow... At Park Creek - Lupine, Shooting Star and Camus... At Alturas Lake - The Trail to the Lake as far as the bridge junction, Over the Hill, South Loop and Sheep Thrills. On Saturday morning, the 17th of December, 2016, the 2,513th anniversary of the dedication of the temple of Saturn in Rome and the first official state celebration of Saturnalia, temperatures in the Sawtooth Valley dropped to their lowest of this ski season. Minus 28 degrees fahrenheit was reported at the Smiley Creek Airport at dawn. The temperature had only risen to minus 9 degrees by 11 a.m. More trail grooming will hopefully take place this weekend if the temperature manages to climb from its present bone chilling zone. Davinius, the old pagan groomer was happy for once to stay indoors and began his Saturnalian Saturday by stoking the home fires and lighting candles to symbolize his ongoing quest for knowledge and truth. He then turned to celebrating Bachus, and randomly shouting out "Yo Saturnalia!!" in good cheer. "Ho, Ho, Ho Saturnalia!" responded his friend, the pretty girl from the village, as she pulled another loaf of banana bread from the oven.