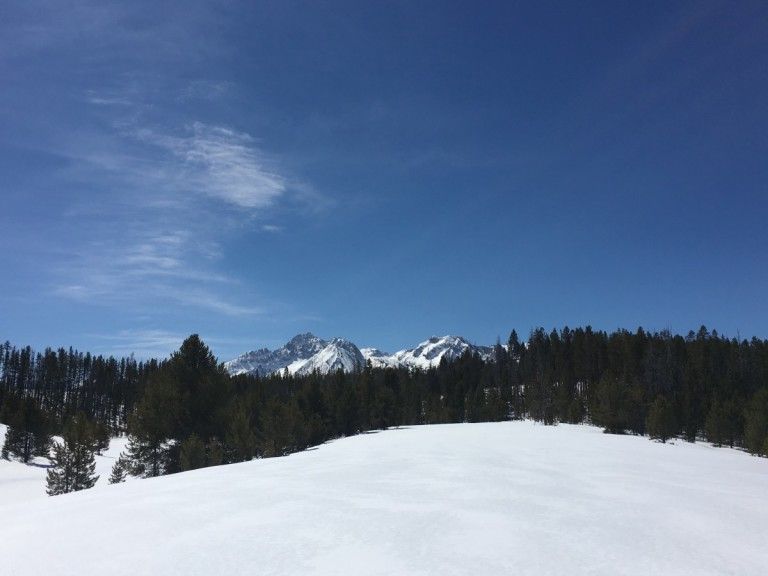 There is a thing that sometimes happens here in the spring. Everything is still covered in a thick and hardy layer of snow but spring is peeking through. The days get into the 40s, 50s, maybe even 60s. The nights still dip way down into the teens.

When this happens. When there is a lot of snow and a steady increase then decrease in temperatures, Mother Nature gives all who dapple in the world of skate skiing a wonderful gift.

We call it “crust cruising”. The warm days melt the snow surface. The cold nights freeze them solid. And suddenly any and all snowy surfaces lay out smooth and fast and open. One can literally skate ski for miles, haphazardly in any and every direction.

When this happens, it feels like magic. It feels like a miracle. It is a precious reminder to my winter-weary self not to turn to dirt just yet. This snow still has a lot more to offer.

Crust cruising doesn’t necessarily happen every year. Last winter, the weather went from snow to torrential rain. The rain made the snow surface pocketed which made it really hard to skate ski.

It takes a gradual transition. An ease from winter to spring.

During these times, I forget just how glorious crust cruising is. Thank goodness Mother Nature pays us lowly humans no mind!

There is another part of crust cruising that makes it even more elusive, even more magical. The window to do it is short. Not just the seasonal window but the daily window. One must get out there when it’s still cold outside. One must beat the sun.

By around noon, or earlier as summer draws nearer, the sun really ramps its rays. At first it makes the snow even better. It gives it just a little bit of cushion. But then those skinny skis started to sink. And then the cruising is over.

Yesterday, I spent the early morning with two friends cruising the crust. We skied side by side, swerving, circling, climbing, dipping. We skied through the vast meadows that, in another couple months will be covered in wildflowers. We skied up steep hills. We skied on top of moraines. It was sunny and there were birds everywhere and the snow was fast and easy.

Near the end of our cruise, we skied by sandhill crane territory. We heard them call and stopped. Down by a creek, there were two cranes facing each other. As we watched, the cranes did their yearly seductive dance. A hopping and twirling gesture of romance.

The dance was meant just for the crane couple. So we kept our distance, watched for a bit, then eased away before they could notice that they had an audience.

The sandhill cranes are a right of passage here in the valley. They are the first sure sign of spring. They like to spend their time far out in the meadows, tucked right up against the based of the Sawtooths and Nip-N-Tuck hills. Far away from roads and snowmobile trails.

Tomorrow, I will strap on the skate skis and go join them.