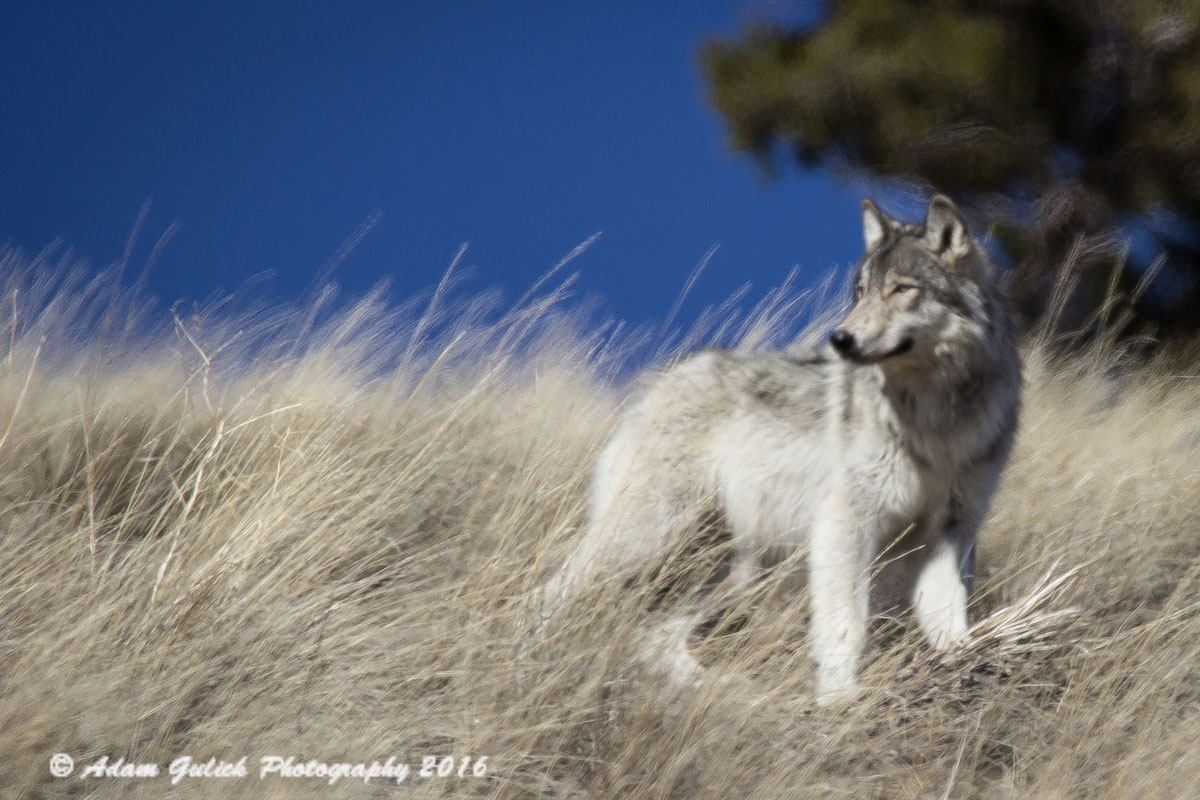 The Dogs of Dogtown: Canidae of the Sawtooths

As someone who considers themselves a wildlife enthusiast, winter in Stanley lacks the abundant diversity that it does through the rest of the year. While the deep snow and sub-zero temperatures drive the majority of species to fairer climate, the snow-laden ground can reveal what remains. Throughout my years in Stanley it has become apparent that all three Canidae species will stick around and tough out these conditions. As the snow melts, the frozen ground peals away, and spring emerges, these wild dogs seem to be enjoying the thaw as much as the rest of us. Here are the three Canidae species to look for around the SNRA.

The Red Fox is commonly known around Stanley and the surrounding areas. Unlike most wildlife, the red fox seems to adapt well to living among people in developed areas. Often denning in close proximity to town for protection of young from more leary predators, while taking the opportunity to dine on poorly stored garbage. Adult fox stand between 14-20 inches at the shoulder, typically weigh around 10-12 lbs. Their coats are thick and fluffy in the winter months making them appear larger. Coloration varies dramatically. Cross fox and silver fox, which are really color morphs of the red fox, occur relatively often in populations around Stanley. The red fox's diet also varies greatly. They are known to feast on everything from small rodents, birds, wild fruits and grasses, a hefty helping of insects and invertebrates, and, of course, the delicacies of the trash can. The Red Fox can easily adapt to a wide variety of habitats, from the tops of the mountain peaks to my back porch. The fox's young, known as kits are born in March and April. The kits will soon be emerging from their dens to frolic in the spring sun.

The Coyote is widespread across most of the country and became a household figure with the antics of a character by the name of Wile E. Coyote of the cartoon series Looney Toons. You won't see these hounds attempting to outsmart a roadrunner in the Sawtooths, but a good population has carved out permanent residence. The adult coyote can vary in size, depending on genetic variations within regional populations. Northern populations tend to grow larger and eastern coyotes are believed to have wolf DNA, making them the largest subspecies. The typical adult sawtooth coyote will weigh somewhere between 20 and 40 lbs. Being substantially larger than the fox widens the availability of prey, sometimes as large as deer. Coyotes are common in the flat bottoms of the Sawtooth Valley. Listen for them howling and yipping at the night sky.

Once believed to be extinct in Idaho, this large carnivore has made a prolific return in the SNRA, Frank Church Wilderness and the surrounding areas. Entwined in controversy, the opinion on the return of the wolf to the landscape is a divided one. Even with hunting and some culling to prevent negative human conflict, the wolf is here to stay. This large carnivore can stand 2 1/2 to 3 feet at the shoulder weighing upwards of 180 lbs. Like the coyote and fox, the color of the wolf coat may vary, but it is commonly various tones of grey. Black wolves and the rarer white wolf may also be encountered. The grey wolf primarily preys on large ungulates. A pack of multiple wolves hunts with deadly efficiency. Wolves are less common to encounter than the other two Canidae in this article, however, the packs will be moving with migrating ungulate herds back to the Sawtooths. Wolves mate in the late winter months and with just a 63-day gestation will be denning with their litters around spring. Wolves have a very large territory, so the chance of an encounter will likely be being at the right place at the right time.

There you have it, the three species of Canidae that inhabit the SNRA. Remember, although they resemble "man's best friend", these ancient ancestors of Fido are still very much wild. Keep a safe viewing distance and treat wildlife with respect. As wildlife begins to return, it is a great time to get out and see the diversity of species that make their summer home in the Sawtooths. Happy wildlife watching!