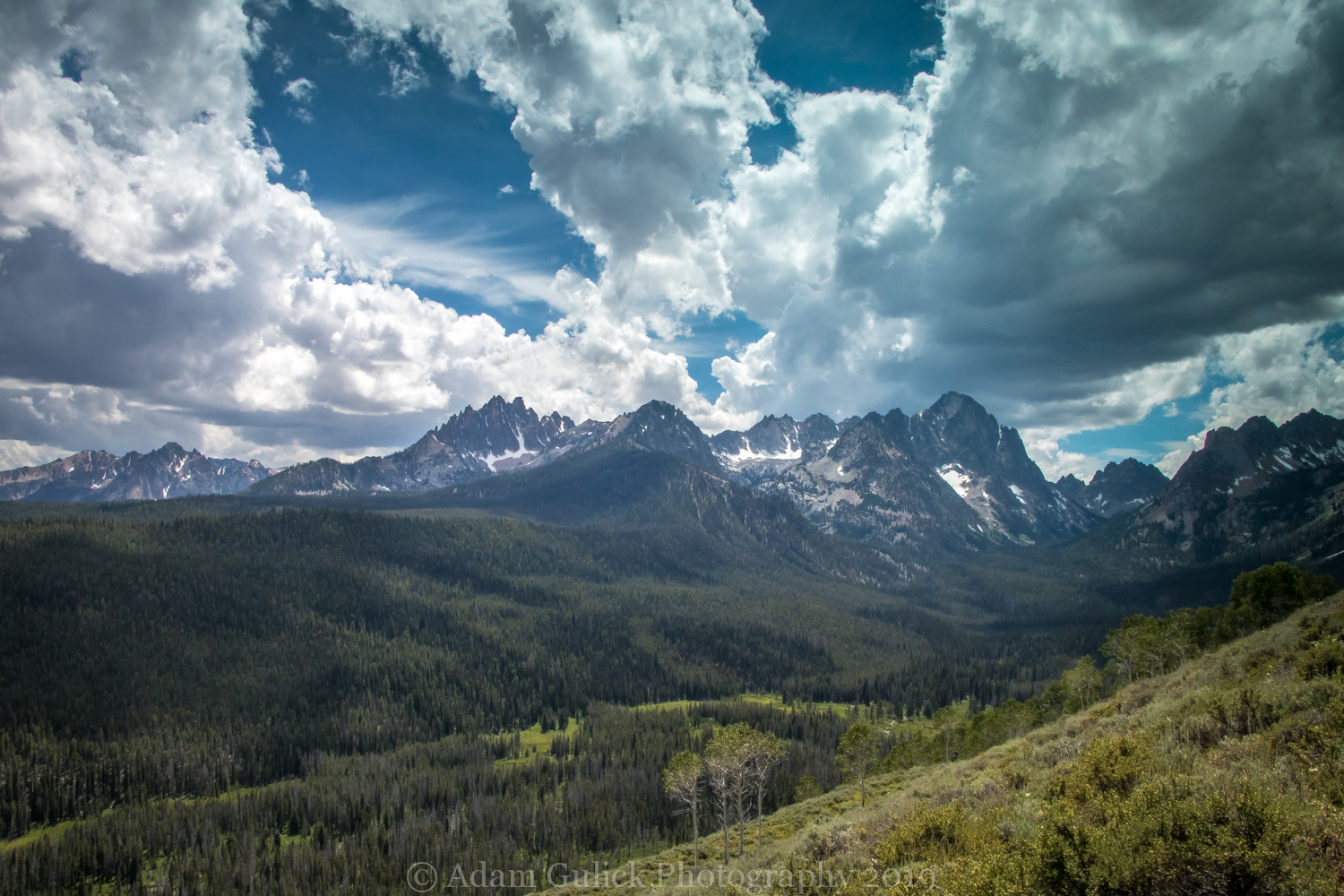 Into the Belly of the Mountain: Climbing Thompson Peak

Over the years I have managed to explore almost every nook and cranny of the mountains surrounding Stanley. Somehow summiting the tallest peak in the Sawtooth mountains has fallen to the wayside. Having put this adventure off for many years, this weekend bagging this peak made it to the top of the bucket list.

Thompson peak tops out at 10751 ft. making it the crown jewel of the Sawtooth Range. From Stanley, Thompson Peak appears to be dwarfed by it's sister peak, Williams, which is actually the third tallest in the range. From the east shoulder of Williams Thompson rises like a fortifide tower of some ancient fortress. It's stone cast walls impossible to climb without ropes and harnesses. The only gate to the summit lies on the west face out of sight from the valley floor.

There are a few options for approaching the mountain, but the most common and sensible is from the Redfish trail-head. The elevation at the trail head is 6558 ft. By the end of the journey, you will have gained 4193 ft. over approx 6.5 miles. 0.3 miles after leaving the parking area the trail forks. For access to Thompson, stay right. The left route accesses Bench lakes and follows Redfish Lake before it connects with 100's of miles of wilderness trails. Heading towards the summit of Thompson, stay right along Fishhook creek for another 0.5 miles where the trail forks again. The left path dead ends up Fishhook Creek. Stay right and climb approx. 450 feet to the ridge above Fishhook Creek through large groves of quaking aspens, glowing glorious gold in the fall, for another 0.5 miles where you'll connect with the "Alpine Way" trail. Hang left, west bound toward Thompson. The trail flows the ridge, a long tentacle of Williams Peak, hosting some of the best views the Sawtooths have to offer. Lupine, Sego, Penstemon and other colorful wildflowers decorate the trail. Views of the White Cloud Peaks open up to the east, dominated by the 11,814 Castle Peak.

After a little more than 2 miles along Fishhook Ridge, 3.5 mile total from the trail-head, "Alpine Way" trail hooks Northbound. This is the departure from the maintained trail. A well-worn, unmarked trail continues toward Thompson. "Alpine Way" continues to access Marshall Lake, Goat Lake, tying into Iron Creek trail-head and Stanley Lake.

Approaching Thompson Peak beyond this point should be no problem for the seasoned hiker, but may pose consequential risks for inexperienced individuals. The route skirts the east flank of Williams peak along a steep, south facing slope, with the occasional old-growth Douglas Fir providing a shady retreat. Paintbrush, Balsamroot and Idaho Bluebell bask in the sun watching over the formidable Thompson Peak. A small unnamed lake can be seen below an avalanche riddled valley. After around another 0.3 miles the foot path begins traverse scree and loose gravel before climbing along a small spring fed stream shedding from Williams peak. Follow the right side of the stream up to a meadow where the source of the stream emerges from the depths of the mountain. The route climbs beyond the meadow over 300 feet to the rim of a larger lake. This lake has no official name, but has come to be known as Thompson Lake or Profile Lake(not to be confused with the Profile Lake that resides further South in the Sawtooths).

The landscape is now dominated by rock, scree, and snow fields with some Whitebark Pine and hardy alpine forbs and shrubs. The foot-trail is nowhere to be found among the granite landscape. Navigation is key beyond the lake. Stay to the North-side of the lake climbing above the steep cliffs dropping a couple hundred feet to the lake below. After about 0.3 mile from the lake, you'll come to a small tarn. Keep climbing to the right through boulders and snow fields before climbing granite shelves along a stream that decsends form the mountain. A large tarn sits below a granite wall that extends the saddle between Williams and Thompson. Stay to the left of the tarn towards a steep pitch to the left side of the wall. Cramp-ons, ice axes, and/or trekking poles may come in handy from this point on. Once at the top of this pitch, you'll find yourself in a wide basin with the views down into the head of Goat Creek drainage, Goat Lake, and the surrounding granite peaks.

Thompson peak appears as a sharp pinnacle, impossible to summit without ropes and climbing gear. Your approach will be a steep chute on the south west slope. There are various routes from the saddle varying in difficulty. I opted to side hill to the saddle off the south side of the mountain before cutting back north and up the chute toward the summit. Your boots will be traversing lichen covered granite with patches of alpine forget-me-not, alpine sunflowers, and phlox. Top out at 10,751 ft on the granite knob of the highest peak in the Sawtooth mountains. Views expand west into the sea of Sawtooth peaks. Mount Reagan, Alpine peak, and Baron peak jut up from the granite batholith. To the south, a cluster of peaks (Braxon, Heyburn and Horstman), rise towards the sky. The Sawtooth Valley opens to the east with the White Cloud Peaks gracing the skyline. To the North, Stanley sits some 4500 ft. below, the Salmon River mountains beyond. This is what conquering a mountain looks like!