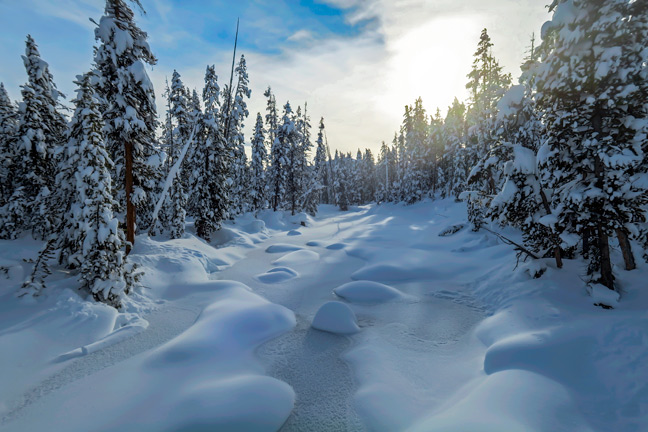 Attention… warming trend detected! At 11 a.m. on Tuesday, January 17th, the temperature at the Stanley Ranger station was already at minus 1 degree fahrenheit and the Smiley Creek Airport reported a positive number 9. Number nine. Other BREAKING NEWS… At the Park Creek Ski Area at least 9 large limb laden lodgepoles totally block Skyrocket trail. Best trails are Shooting Star and Camus…. Sego and Larkspur are rough. At Alturas Lake, South Loop, Over the Hill and the Trail to the Lake as far as the bridge were Ginzu groomed for skate and classic. Wapiti and the trail from the bridge to the lake are improving but rough. North Cabin and Sheep Thrills are still buried from the last storm. Amazing winter storm Iris was the ninth of this season… Iris, the rainbow goddess, messenger of the gods and conciliator who restores peace in nature. Grooming scheduled Tuesday afternoon, more snow Wednesday.