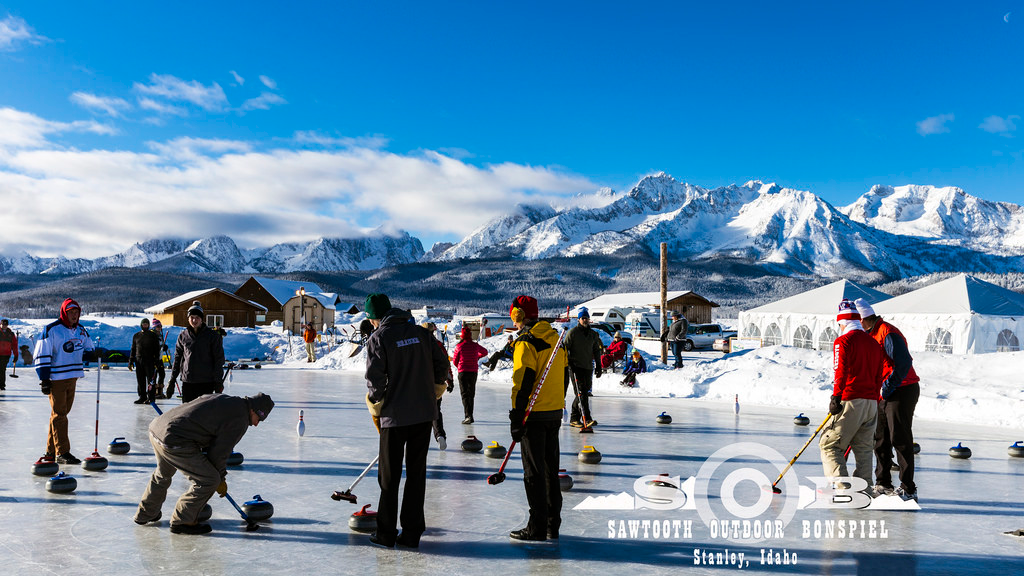 It’s finally happening. We are emerging from the ice box of January into winter festivity season in Stanley. The days are getting longer, the temperatures are up, and the weekend forecast is looking auspicious for our first 2017 signature event: the 5th Annual Sawtooth Outdoor Bonspiel.

Never heard of a Bonspiel? Don’t fret, until I came to Stanley, either had I, so I’ve done a little research for you. Check out this definition from UrbanDictionary.com:

n. "sporting" activity in which marginally inebriated Canadians curl large lumps of granite down a frozen carpet of ice in order to obtain a "hammer" which, I believe, is the metric equivalent of a "fifth" of rye. Oddly enough a "fifth", in curling, is a player too incompetent to play well.

Simply put, it’s a curling tournament, but in Stanley it also represents the end of the harshest weather and the beginning of what we love about winter. From its roots in 1500’s Scotland to Olympic popularity, curling continues to draw Idahoans to rinks all over the state. This year, 16 four person teams are competing, with two alternate teams waiting in the wings. The Lawn Chairs, Stanley’s very own team, will once again grace the ice.

Most of us are familiar with the curling events featured in the Winter Olympics, but what we see on TV only tells part of the story. The sport of curling is defined by a passionate adherence to sportsmanship and good will. Players praise strong shots by the opposing team and refrain from applauding their own success. According to Wikipedia, “concession is an honourable act and does not carry the stigma associated with quitting, and also allows for more socializing.”

“Socializing” often means the time honored tradition of the winning team buying the first of many rounds enjoyed while recounting highlights of play. Off rink events this year include opening ceremonies, a banquet dinner, and live music at the Mountain Village Stanley Club Saloon by Austin, Texas sensation Aaron Einhouse.

According to curler Daniel Dettmers, “It takes about 4 hours of curling to go from newbie to beginner. Another 50 hours gets you from beginner to novice. To go from novice to skip (expert) will take 5 to 25 years. It’s a steep learning curve.” Curling also comes with its own language, bringing new meaning to words like biter, hog line, bumper, burning, and swingy. Ready to try your hand? Come on up to the rink at noon on Saturday for instruction, throwing practice, and your first game. It’s almost a guarantee you’ll get hooked. In fact, that’s how this one of a kind event was born, from a Learn to Curl class put on by the Boise Curling Club.

If you live in Idaho, you’ve probably spent the last few weeks dealing with the less enjoyable aspects of winter. Drop that shovel, grab a friend and treat yourself to a break. Come to the high country for an unforgettable new experience at the Sawtooth Outdoor Bonspiel. See you there! --Alison French Steen

For more information, visit the Stanley Sawtooth Chamber of Commerce at http://stanleycc.org/event/fifth-annual-sawtooth-outdoor-bonspiel-s-o-b/