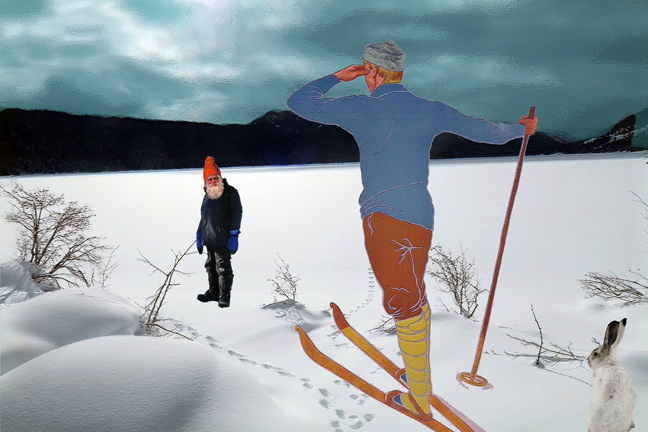 On Thursday, the 2nd of March, the old groomer Davinius and Walter, the famous Swiss single pole skier, met on the frozen shores of Alturas Lake. Davinius had just ginzu groomed the trail from the bridge to the lake and Walter had skied out in hopes of bagging a March hare sighting for his life list of birds and mammals of North America. He had seen the hare in February, just three days earlier, but figured that a February hare was not the same thing as a March hare. “They’re the same thing.” said Davinius. ‘Not the same thing a bit!’ said Walter. ‘You might just as well say,’ he added , ‘that “I like what I get” is the same thing as “I get what I like”!’ “Well, maybe you can get what you like at the Ski Club auction on Saturday night, anything you like, excepting Alice.” offered Davinius, “And at that evening’s supper, you might even see a Mexican Mole Chicken to add to your list.” “A March Mexican Mole Chicken?” asked Walter, and just as he spoke, he noticed that one of the trees on the lake shore had a door leading right into it. ‘That’s very curious!’ he thought. ‘But everything’s curious today. I think I may as well go in at once.’ And in he went.