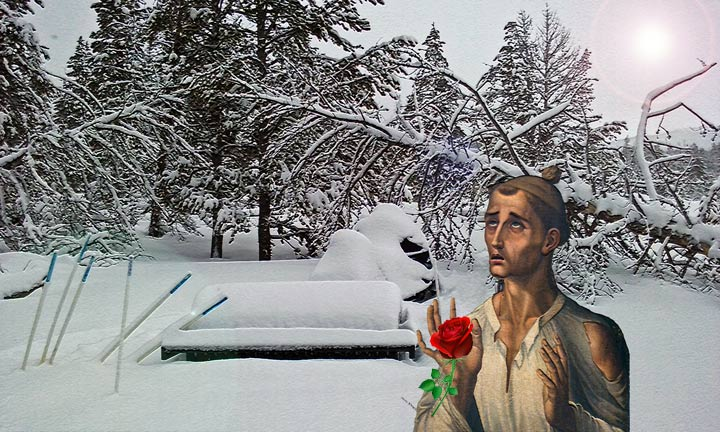 On Monday, the 26th of December, Shooting Star and Camus Loop ski trails at Park Creek were dragged and looking solid enough for skating and touring. At Alturas Lake, the Trail to the Lake as far as bridge junction, Over the Hill, and South Loop were ginzu groomed on Monday for skating and touring and the first classic tracks of the year were set, Wapiti and Sheep Thrills trails were rolled. However, on Tuesday, December 27th, those trails and tracks are once again disappearing under a blanket of snow. Moderate to heavy blowing snowfall will be making travel and skiing difficult. Up to a foot of snow accumulation is expected. The 26th and 27th of December are the feast days of St. Stephen, the protomartyr.

Saint Stephen with a rose, in and out of the garden he goes Country garden in the wind and the rain Wherever he goes the people all complain Stephen prospered in his time, well he may and he may decline Did it matter, does it now? Stephen would answer if he only knew how Lady finger, dipped in moonlight, writing “What for?” across the morning sky Sunlight splatters, dawn with answer, darkness shrugs and bids the day goodbye Did he doubt or did he try? Answers aplenty in the bye and bye – Robert Hunter
Source Url: http://stanleycc.org/blog/posts/st-stephens-day-snows-hit-ski-trails/