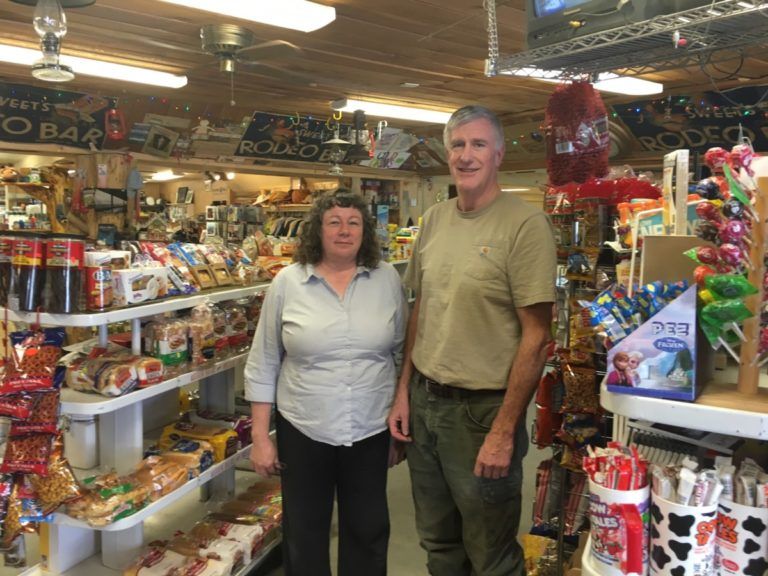 The Little Store by the River

Meet me at the Lower Stanley Country Store, Cabins and Motel.

When Ben and Janet Forsgren first moved to Stanley, Idaho they weren’t looking for much – just a home where raising 7 children could be done with the help of the countryside and a way to make a living that didn’t make Ben sneeze.

It was Ben’s hay fever that drove them off their cattle ranch in Thatcher, Idaho. The hay fever and the life style.

“I didn’t want to spend the rest of my life and raise 7 little children on a cattle ranch. That was barely survivable,” Ben says.

So Ben and Janet and their kids picked up, moved to Lower Stanley and bought Jerry’s Country Store, Cabins and Motel on the banks of the Salmon River.

“Can you imagine the school district when we showed up with 7 children?” Ben says.

The Forsgrens had no experience running a motel or a store. When they first walked through their newly purchased business, gazing at the grocery items that were now theirs to sell, they didn’t even know what some of them were.

With the help of the former owner, the Forsgrens figured it out and now, almost 17 years later, Jerry’s has been renamed Lower Stanley Country Store, Cabins and Motel and is a mainstay of Stanley for tourists and locals alike.

The Stanley locals go to the Country Store for its selection of gluten free flour and large tubs of Adam’s peanut butter and bags of kale. They go to buy live bate worms and rent movies. They go to the small but well-stocked store to chat with the Forsgrens about the latest snowstorm – which roads are closed and strategies for getting cars unburied.

For the couple, the residents of Stanley can be tracked by the items they buy.

“When somebody moves away we wonder “why aren’t we selling this so much anymore? Oh, that's right, Duane left,” Janet says.

The Forsgrens make strides to accommodate the food preferences of their patrons, stocking the shelves with both name brands and specialty items. They are always aware of who wants what.

“Joel and his wife who live in Oregon always rode their bikes through Stanley on the way to Glacier. We had to make sure we had our tofu and fruits in the store when they came through,” Janet says.

The Forsgrens have not only made their grocery store a welcome place for locals and tourists, but also their motel and cabins. The accommodations on the banks of the Salmon River serve as a place of relaxation after a day of adventure in the summer and a place of refuge from the storm in the winter.

If a traveler needs a place to stay, no matter how much money they have in their wallets, the Forsgrens will not turn them away. In the dead of winter, it is between giving someone a bed, and sending them on their way over treacherous snowy passes.

“You can’t send somebody down that road in the middle of the night in the winter,” Ben says, “That's the legacy that Jim, the former owner, left us. You don’t ever send away anybody.”

Even in the summer, when their cabins and rooms are fully booked, Ben has sleeping bags that he will hand out to those who need them.

“I’ve had people sleep on our front steps in our sleeping bags,” Ben says.

“We are never alone. We always have people coming in,” Ben says, “It’s kind of like being a barkeeper. But not really.”

From their little spot by the Salmon River in Lower Stanley, the Forsgrens see all sides of the Stanley populace, from the family touring through on bikes with their 3 and 5 year old children strapped to the back, to the locals who come in to buy the same thing every week. The Forsgrens witness, through the passing characters of the town, the shifting of Stanley, from winter to summer, from year to year.

They witness and they take note and they try their best to adjust their business accordingly. And though at times the tourists get too needy or the locals too grumpy, overall the Forsgrens love the company of their patrons.

“I’d rather be here than anywhere else as far as the people go. The local people…they are kind of like family to a degree,” Ben says, “And of course how can you beat the Sawtooths? You can’t.”