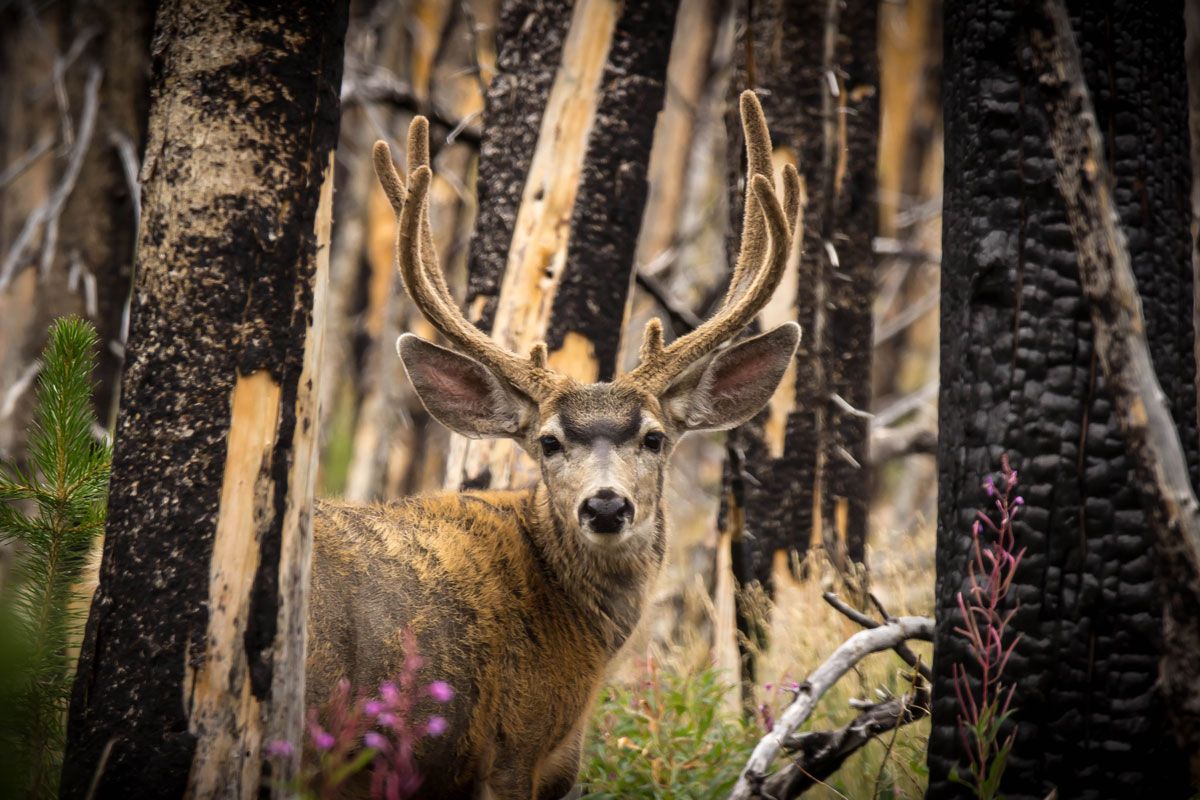 In the Velvet: The Ghost of the Mountain

The frigid October air was unforgiving that morning. The sun has yet to rise, but my eyes set fixed on the ridge across from me. Sitting still is nearly impossible in these temperatures. I could warm up if I moved around, however, I felt this was the spot I needed to be.

It all started earlier that summer when a couple of tourists came through town. I hadn’t personally spoken with the men, but they had shown my father a photo of a mule deer buck that they had seen near their camp. The only thing I knew about the deer was how my dad described, “like one on the cover of a hunting magazine.” It was a vague description, but it was enough to start an obsession.

Antlers are unique to the cervid family. Idaho has its fair share of species belonging to this family, including Mule Deer, Whitetail Deer, Rocky Mountain Elk, Shiras Moose and even a small population of Woodland Caribou residing in the Northern Panhandle of the state. With the exception of the Caribou, only the males of each species grow antlers. The antlers serve as battle-ready weaponry, stature, and a means of dominance in a tournament model hierarchy, occurring every Autumn, known as the “rut.” Not every encounter between two rivals will results in combat, often sheer intimidation of the dominant beast is enough to cause an inferior animal to retreat. However, when two are closely matched and the opportunity to carry their genetic blueprint onto the next generation is on the line, the battle will commence. The two animals will lock antlers, pushing, twisting, turning, in an attempt to defeat the other. This sparing is brutal and merciless. To the victor goes the spoils.

By the time winter rolls around, the rut is over. Testosterone levels drop to their lowest levels, causing bucks and bulls to shed their antlers the following spring. After the antlers are shed, the process of regrowth begins. Two lumps will begin to protrude from the pedicles atop the deer's skull. This new growth is covered in a vascular skin, commonly known as “velvet,” due to its soft, fuzzy appearance. The velvet supplies blood and nutrients, assisting in the forging of the new headgear. During growth, the antlers are particularly vulnerable and prone to damage, which keeps these typically elusive critters out of the brush and heavy timber, providing an opportunity to see nature's wonder in the flesh. By late summer the antlers have fully formed. The animals rub their antlers on trees and shrubs removing the velvet, revealing a newly polished crown of bone, ready for battle.

Knowing very little about the buck in the photo, I spent the rest of the summer trying to unravel the mystery. I glassed the hills, studied maps, and read everything I could about the habits of big Mule Deer bucks. I never was able to find that buck, but I still I sat in the bitter cold atop that ridge. The sun was fully cast across the Sawtooths now. It had been light for about an hour. “He must have moved on to a different area,” I thought to myself. Losing hope and patience, I decided to move on. I pushed a few elk downwind, as I dropped into the bottom of the draw and up the other side. Creeping along, I eventually found myself where I suspected the mystery buck to be bedded. I took a look around and caught the sun glancing off the back of a deer across the next draw. I pulled my binoculars up. It was a nice buck, but not the one I was looking for. It was time to make a decision. Settle or keep dreaming. Just then, I heard the hollow thump of hooves on the frozen ground. I looked over my shoulder. “That’s him!” I said aloud to myself as a tangled web of bone, perched atop a deer, trotted into the pines. I pulled up my rifle, momentarily blinded, as an orange glow eclipsed my vision. The morning sun had crested the mountain, penetrating the trees, glaring into my scope. I pulled down to relocate the buck. By now, I could only catch glimpses as he disappeared into the mountain. I haven’t seen that buck since. Who knows what happened to him. Perhaps another hunter put him to rest, maybe he perished that following winter, or fell victim to the tooth of a predator. I sometimes wonder if I had imagined it all, or if I had seen an old ghost wandering the mountain. A figment of my imagination or not, I still search for that buck to this day.

Late Summer is a great time to view these magnificent animals. Antlers are still in velvet, but nearly full grown. The Stanley area is the summer home of migratory elk, deer, and the occasional moose. To see these fuzzy horned creatures, glass sun-draped slopes early mornings and late afternoons, feeding on the nutritious mountain shrubs and flora, essential for healthy antler growth. Bring a telephoto lens and a steady hand. Backlighting is particularly nice for catching the texture of the fuzzy velvet. Who knows, maybe that old ghost of the mountain will reappear one of these sultry summer days in his velvet crown.