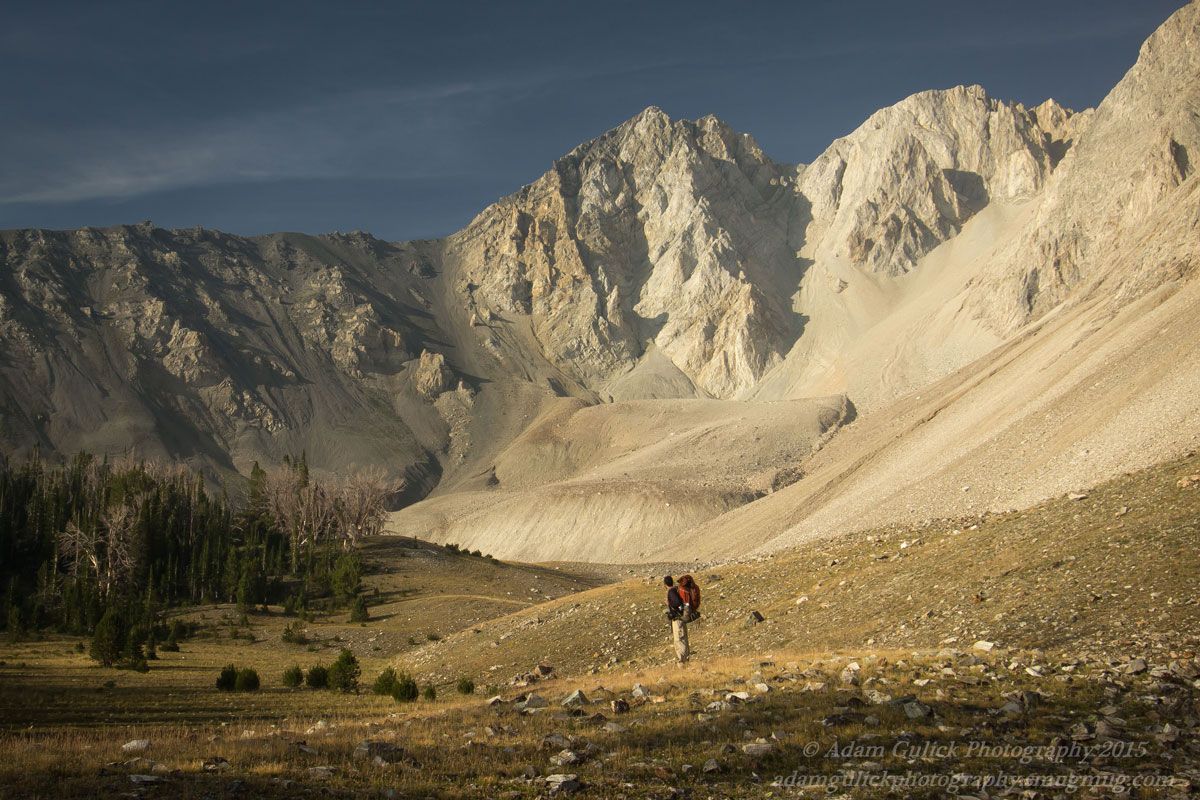 Into the White Clouds: Bears, Untamed Wilderness, and Stories Untold

I grew up an Idaho boy. Spending most of my youth in the Northern half of the state, I had never set foot in these mountains. In September of 2010 that all changed.

I had arrived, spit out by the winding river road, just barely light enough to see. I pulled off the side of the road arrested by the magnificence before me. I was on a mission to backpack four mountain ranges in Idaho. My first stop was the White Cloud Mountains. I remember it like it was yesterday.

I started up Fourth of July Creek that morning, as the sun began to crest the mountains. The morning light struck the Sawtooth range across the valley The back end of my old Ford Ranger, bounced and skipped up the washboard road. The aspens shivered in the cold morning air, glowing in their fiery fall colors. The peaks stood like monoliths above the scorched timber. I was about to embark on a four-day journey through the white sloped peaks, lake basins and mountain meadows that lay before me.

Those four days in The White Clouds changed my life. 18 months later, I packed up my things and moved my life to the heart of Idaho. Eight years later, I have explored most every creek, fished the mountain lakes, climbed a number of those iconic peaks, and been humbled in its merciless wilderness. But still, a big piece of the puzzle is missing.

I've looked down onto it from Strawberry and Iron basins. I've perched high above it, on the peaks of O'Caulkins and Patterson. I've drank from its headwaters at the borne Lakes, but the 21-mile trail that follows Warm Springs Creek to the Salmon River, had never touched the soles of my boots. I was determined for this to be the year.

It's May 29th 2018: I slurped the remainder of my coffee and started up the trail out of Robinson Bar. The plan is to let my feet carry me as far as they'll take me up the winding trail. The morning clouds hung low in the canyon. Out of the gate, I made the first climb. At the top, the trail emerges from the Douglas Fir, providing views upstream and across to Robinson Bar Ranch. The trail quickly descends back to stream level. The bottom is lush from Spring rains and the creek is flowing with all its might. The morning dew quickly soaked my boots. In a matter of minutes, water began to seep in. I looked down, mumbling "they don't make em' like they used to, as a dark shape moved into my vision across my brow. I looked up. A large black bear was grazing no more than 20 yards in front of me. I instinctively went for both my camera and my .45. I yelled, "HEY BEAR!" Expecting the bear to look at me for a moment and bolt into the brush, I began to lift my camera. Just then, confused of my location, the bear looked the other direction, turned his shoulders and began running towards me. I let go my camera and quickly drew my gun, yelling "HEY BEAR, HEY BEAR!!!" The bear stopped in his tracks. My heart beating rapidly, sweat dripping from my forehead, once more, in a trembling voice, "heeeyyyyy bear." I watched my glassy reflection in his eyes as they grew in astonishment. The bear lumbered off, taking one last glance as he slipped into the brush.

Taking a deep breath, I continued up the trail, a bit more nervous than before, gun still drawn. After a few minutes, I calmed down.

The trail had moved away from the creek a bit and according to the map, another challenge lies shortly ahead. I slowly hiked along, enjoying the sun as it began to emerge for the fog, weaving through the trees, examining the flora and fungi carpeting the forest floor. Suddenly, I found myself back at the creek and the trail was leading directly into it. The crossing was swift, deep, and frigged as the snow from which it came. I searched upstream, but the steep canyon walls made it impossible to travel further. I searched downstream with no options close to being safe. My trip had come abruptly to an end. Locked out by the forces of nature.

Making the best of the situation, I set up camp next to a small stream. The day was still young, so I climbed up the canyon walls in search of a better view. The hills were draped in sage, bitterbrush and balsamroot. Elk and deer fled from the benches and saddles. I climbed until the snow blocked my path. I basked in the sun, looking across the landscape. As the sun began its decent, so did I. I headed back to my truck early the next morning, know that I would soon return.

~Blog and Photography by Adam Gulick